From Google to SoundCloud to the UK's biggest software company, Caoimhe Keogan is all about bringing humanity to the workplace

Caoimhe Keogan, Chief People Officer at industrial software firm AVEVA, is a very 21st century professional. Keogan has built a rewarding and fulfilling career within the technology realm, and she's done it by following her own interests and passions from the earliest opportunity.

"I started working as a teenager as soon as I could, and I loved the independence,"  she said.

Keogan also enjoyed observing the structures of work and organisations and found them fascinating. Whilst she says that she did not set out to be an HR professional in a technology organisation, with hindsight it is not surprising that she gravitated towards it.

"I did a master's degree in organisational psychology and became fascinated by workplaces and organisations, what makes people tick and how organisations function."

Seven years in consulting proved to be a perfect foundation to build on. Keogan enjoyed the management of change and transformation in many different types of organisation, particularly in the public sector.

She then made her move into the corporate technology realm when Google came calling in 2007. By this time, Google had already become a verb and the company was in a hyper-growth phase. Keogan quickly learned that when arriving at companies in this phase of development, job descriptions could be pretty elastic. It's wisdom that she is keen to impart to others.

Flexibility and open mindedness is really key to being successful in tech businesses, because it's so fast-paced

"When you joined Google in those days job descriptions weren't really the thing. It was more, come in and figure out what needs to be done! I say to people that whilst it's important to have clarity about what you need to deliver and what's going to make you successful, inside high-growth companies it is less about focusing on the specifics of your job description and focusing a lot more on what needs to be done. How do you serve your customers? That flexibility and open mindedness is really key to being successful in tech businesses, because it's so fast-paced."

Instead of climbing the ladder at Google or making the move into a similar organisation, Keogan took a risk with a sideways move in 2013, relocating her young family to Berlin and the music start up SoundCloud. The move appealed to Keogan because it gave her the opportunity to shape an organisation from the ground up, as well as helping her to relate to employees in more technical roles.

"It involved building an organisation and that's sometimes how I relate to people in more sort of technical jobs in the companies that I work in because where they're building the products then I think about how we build the company. How do you build the organisation in a healthy way? That's the challenge when growing really quickly. How do you codify your culture? How do you be clear about what the company stands for? What are your values?"

Keogan retains an understandable pride in the company that she helped to build, imbuing it with a healthy working culture.

"I take great pride in the work we did to build the company right the foundations.  I joined the company when it was about 150 people. We scaled to around 450 to 500 people. We opened an office in New York and grew that office to more than 100 people. Helping to build a healthy company with a really strong focus on culture, on values and on people where diversity and inclusion were core to our values was a real career highlight."

In 2018 Keogan took up her first Chief People Officer (CPO) role at a publicly listed UK company in 2018 at Money Supermarket Group again supporting a business which was going through considerable transformation. Earlier this year, Keogan took up her CPO post at AVEVA - the UK's largest software company. Lockdowns have made her transition into the company a rather different experience than it otherwise would have been.

"I interviewed to join the company remotely, I have onboarded remotely and actually at this moment in time I have still not met a single person in the company in person!"

It is what the return to normality will look like in the (hopefully) post-pandemic world that is keeping Keogan busy right now.

"One of the exciting challenges ahead of me in this job is figuring out where we go from here. A lot of what I'm focused on at the minute is still taking care of our employees through the pandemic, because it is far from over, and it varies so much depending on where you are in the world. I am leading the ongoing care and support for employees but also thinking very much about the future of work."

Early on you do a lot of learning by a type of osmosis - by being in the office, observing people

Whilst the hybrid model of working appeals to many employees - particularly those who have a reasonable working environment at home, Keogan is keenly aware that for those who are at earlier stages in their careers, the more traditional office-based model has its advantages.

"Early on you do a lot of learning by a type of osmosis - by being in the office, observing people and just being around others doing their jobs. We have to be very sensitive to that and make sure that it's a flexible model because one size won't fit all," she said.

"When the pandemic first arrived, I was in my previous role, and I'd been in it for a number of years so the experience of working remotely there was quite straightforward. When you join a new company, you don't have the benefit of having established all of those relationships and built that trust. It's all about that social capital that you build up by physically being around other people, by having conversations as you stand together at the coffee machine."

Keogan acknowledges that it is very difficult to replicate that environment when employees are working at home all or most of the time - although it isn't stopping her trying. Furthermore, she used her own experiences of remote onboarding to think about how she could improve it for others.

"We're running an internal event called AVEVAfest which is a virtual all company conference where we're bringing people together. As part of that I'm going to be spending time with 30 or 40 colleagues in some virtual reality worlds that we've built to try and replicate that more casual environment. We're very excited about using technology because we're doing this with a view to whether it's something we can use as we're hiring and onboarding employees. The business is in good health and we are bringing on a lot of new team members into the company. We want to use this kind of experience for new joiners potentially to improve that experience of onboarding and orientation to the company."

Keogan is demonstrably keen to improve the experiences of new joiners to AVEVA. She also has a strong commitment to social responsibility and is happy to convey AVEVA's commitment to diversity and inclusion. Many employers in the technology sector claim to have a strong diversity agenda. However, plenty of them are spending money putting employees through unconscious bias training whilst at the same time doing very little to alter existing power structures.

At AVEVA, diversity has a seat at the executive table in the form of Lena Milosevic MBE, Global Director of Diversity, Inclusion and Wellbeing. Milosevic is helping Keogan to build strategic plans for the company around diversity and inclusion as a key part of a wider environmental, social, governance and sustainability agenda.

AVEVA is demonstrating a genuine economic commitment to diversity by continuing to publish its gender pay gap despite the government granting time off from this prior requirement. They are also compiling data with a plan to publish their ethnicity pay gap.

"Shining a light on the data, not being scared of what it tells you, because it doesn't always paint the picture that you want to see is how we drive the change," Keoghan said.

Keogan's commitment to improving the experience of every employee of AVEVA is visible in her thoughts about how enterprises describe the people working for them.

"I like the word ‘people' in my title rather than human resources because it sets out your agenda in terms of how you think about people - less as resources and more as the beautiful human beings that we all are, with the flaws and everything else that comes with it. There's something about bringing that humanity to the workplace."

Entries are open for the Digital Technology Leaders Awards 2021 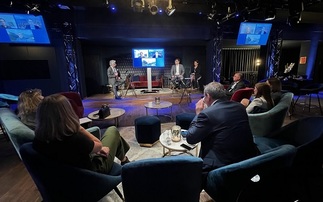 Hybrid work is here to stay, but it’s been far from smooth sailing so far.

The vision thing: When Teams and Zoom won't see you through