Fairphone: a business built on sustainability 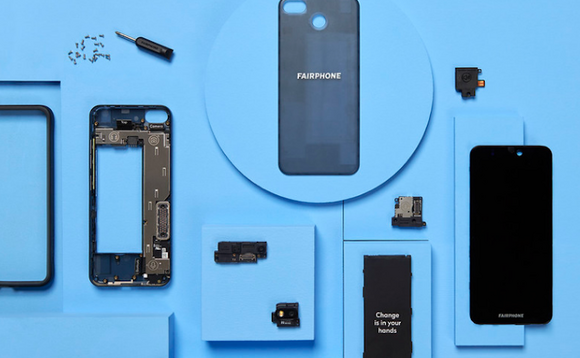 Since it launched its first crowdfunded phone in 2013, Amsterdam-headquartered Fairphone has been something of a poster-child for sustainability in electronics. The company, which manufactures and sells its own smartphones, evolved from a pressure group created to shine a light on murky practices in the global electronics supply chain, particularly around the use of child and forced labour in mining minerals such as cobalt and gold and sweatshop conditions on the assembly lines.

As well as using ethically sourced minerals and audited production facilities where possible, its latest phone, the Fairphone 3+, is of a modular design, which allows parts to be easily replaced by the owner using tools no more specialised then a screwdriver. Forty per cent of the plastics in the phone's case and modules derived from post-consumer recycled waste, and Fairphone pays customers to recycle used phones when they are done with them.

Communications manager Ioiana Luncheon says the company's main goal is still to act as an exemplar for the rest of the industry.

"By establishing a market for ethical electronics, we are motivating the entire electronics industry to act more responsibly," she said.

"This means taking a holistic approach to sustainability that includes both people and the planet. To expand our impact, we need to raise awareness and to build a following."

In particular, Fairphone concentrates on four key areas where it wants to spark change in the industry: long-lasting design, fair materials, good working conditions and reuse/recycling.

"In each area, we are step-by-step pioneering change and improving our phone and our own supply chain, thereby raising the bar for others in the industry to follow and join us on our journey for fairer electronics," Luncheon said.

To assess and demonstrate progress in these areas, the company releases an annual impact report to measure performance against KPIs set the previous year.

The electronics supply chain is anything but transparent, and there may be tens or even hundreds of middlemen between, say, a cobalt mine and the commercially available raw material, so building a phone in which all materials and processes are fully understood is virtually impossible, even for a major supplier. But over the years the proportion of ethically certifiable materials in Fairphones has grown steadily, and more of the manufacturing process has come under the company's control.

"We strive to make the most of the materials used in our products," Luncheon said. "We're moving closer to a circular economy by using materials from more responsible sources, emphasising reuse and recycling, and designing our phones to last as long as possible.

She continued: "The reason is simple: the longer you keep your phone, the lower its environmental footprint. By focusing on simple DIY repairs, replaceable parts, modular upgrades and extended software support, we're making it as easy as we can for our customers to use - and enjoy - their phones far beyond the standard lifespan of 2 or 3 years."

Earlier this year, Fairphone announced a shortlist of 14 new focus materials (up from eight previously) that are frequently used in the electronics industry and which it sees as offering the offer the greatest potential for supply chain improvement. These include the aforementioned gold and cobalt as well as tungsten, tin, rare earth elements and more commonplace materials such as aluminium.

Fairphone is a certified B-corporation, is in the top 1 per cent of companies on the sustainability index EcoVadis and has won plaudits for repairability from iFixit and the French Repairability Index, qualifications that feature strongly on its website and marketing materials.

Sustainability is the firm's raison d'être and its customers see it the same way, Luncheon said. After all, you can certainly find cheaper phones with a similar spec to the Fairphone 3+ and with a much wider distribution network and shorter delivery times.

"Sustainability is very important to Fairphone's customers. They think and act differently out of the belief that positive change is a choice they can make".

Computing will run the Tech Impact Conference this year, exploring the relationship between tech and the climate - including case studies about the road to net zero, how to go green in your data centre and supply chain, and how to make small changes with a big impact. For those who are passionate about the planet - and those who are more wary - there has never been a better time to get involved.