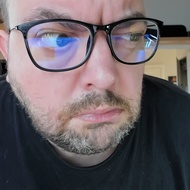 Chris Merriman is a freelance technology journalist who leads an exciting double life as INQ's Associate Editor. He joined the INQUIRER in 2013 after a long career messing about with tech in the music industry. He graduated from the University of Sunderland a very long time ago.

He got his first smartphone in 2003 and his first soldering iron in 1989. Before joining the INQUIRER, he divided his time between managing social media campaigns, music and tech journalism, radio presenting and DJing in London's glittering West End.

His love of all things tech is inherited from his grandfather, who worked on NASA's Gemini, Mercury and Apollo programmes and used to keep discarded rocket prototypes in the garage to cannibalise for odd jobs around the house.

Since he joined Chris has been responsible for several major scoops for INQ, mostly surrounding privacy issues in Windows 10. Weirdly, Microsoft still invites him to things, occasionally.

As well as his written burblings, he can be found doing shonky product demos as the resident "Tech Guru" on The Matthew Wright Show, every Wednesday afternoon on Talkradio. He has also appeared as an expert on Sky, BBC and Al Jazeera amongst others.

Chris's ambitions include having an entry on Wikipedia, a blue tick on Twitter, finding the perfect cup of coffee and the cure for whatever has sent the human race so bonkers lately.

Blade Runner is set in November 2019, here's how accurate the tech is

RIPE's IPv4 allocations to run out next month

But he's not an ex-programmer. He has not ceased to be.

A great fitness watch disgused as an above average smartwatch

Bitdefender on how its protecting your smart home with a Box

And why all the machine learning happens inside your home network

Robocop, but not as you know him: Singapore's has four tyres and a camera

Warning over VPNFilter malware and botnet as more routers are affected

Hawking defied Motor Neurone Disease for much of his life