Insurer LV='s insurance broker division has implemented Nuance's Nina, a virtual assistant, to improve the way it communicates with its broker partners in the UK.

LV= Broker wanted to be able to deliver information to brokers 24/7. It opted to use Nina, which taps into natural-language understanding (NLU) and cognitive capabilities from Nuance, to build its own virtual assistant dubbed aLVin.

Alan Hickman, head of personal lines operations at LV= Broker, told Computing that the decision to use an online virtual assistant was due to frustration caused because there was only one method for broker partners to be able to get in touch with LV=, and that was by using a phone.

"To date, the most effective method for communications with our broker partners in the UK when they had a query or a referral was to pick the telephone up, and we really wanted some new options in a world where the evolution of secure technologies is at a faster pace than it has ever been," he said.

LV= Broker looked into some of the self-service options that it could implement, getting help from LV's fast track and innovation team to look at what was available on the market.

It looked at several options, which Hickman did not name, with Nuance standing out because of the way it can interact with humans.

"What came through with Nuance was that you could converse with the agent quite naturally, and it would naturally act as a guide so that it ensured the least amount of user effort, with a human touch. And the analytics that come along with it allowed us to gain deeper insight into the customer journey from start to end," Hickman said.

LV= ran a pilot from the beginning of May this year to the end of June with four of its broker partners.

"We didn't go heavy with the use of the technology. We gained an agreement from the brokers that they would participate in the pilots and we simply sent an email communication with them that they could share with their teams... with the hope that once they went online they preferred to stay online," said Hickman

The broker partners who engaged with aLVin only needed access to the internet and the ability for their staff to access the broker portal, a central repository of information.

The pilot proved a success and LV= is now looking to implement aLVin permanently.

"We have received some staggering feedback - far better than we anticipated. Things like the fact that in excess of 49 per cent of conversations had social interactions like ‘hello', 'goodbye' and 'thank you', and 98 per cent of brokers said that if it was offered as a full-time service they would use it," said Hickman.

"Over the period, the volume of calls from those partners reduced by 91 per cent and that could have been higher had it not been for a technical problem we encountered half way through the pilot, which was quickly fixed," said Hickman.

According to Hickman (left), questions posed to aLVin averaged a 78 per cent first contact resolution rate.

"What that means is aLVin was able to provide a final answer in around 70 per cent of conversations with the user, and only 22 per cent of those conversations resulted in [needing] a chat with a real-life agent. So it shows that the knowledge that aLVin had collected and the way we mined that data throughout the pilot was really useful," he said.

So, does this mean LV= needs fewer human agents than before?

"Perhaps it enables individuals to look at different roles, and gives them the ability to deal with more complex queries and allows aLVin to do the 'frequently asked questions'," Hickman said.

But doesn't this mean that aLVin is merely just an advanced FAQ section?

"I would say it's far more than that. We designed this specifically so that brokers could deal with most aspects of what they're likely to call us for, and what we didn't want is for the broker to be held in a digital cul-de-sac. If you look at some of the FAQ database and knowledge banks and some of the virtual assistants out there, that's exactly what happens," said Hickman.

The core components of aLVin does actually include an FAQ-type section, but what differentiates it from the norm is what is known as 'decision trees'.

"This is where you can build question-and-answer upon question-and-answer and go through a series of those conversations in order to reach a good end-result. So we actually deal with underwriting queries and referrals through the virtual assistant: it can provide tailored or generic rates, and terms and conditions that the broker would have to apply," said Hickman.

In addition, aLVin is integrated with webchat from another external supplier who Hickman did not name. But this isn't a basic webchat, he said, as it can also enable LV='s agents to introduce themselves with business cards, pictures and profiles, as well as enabling them to share documents in real-time.

"So, say a broker wants to proof a no-claims document, which we'd historically print and post and then they would receive it a couple of days later. They would then post it to their customer. We can now do it, there and then," he said.

But for all of aLVin's benefits, Hickman said that the virtual assistant can't quite be described as artificial intelligence (AI). However, AI is an area that LV= is keeping a close eye on as a business.

"In order for us to be competitive, and to keep that competitive advantage, and to be the brokers' preferred insurer, then it's our responsibility to keep a close eye on it," he said.

Cambridge study finds 85 per cent of Android devices are insecure 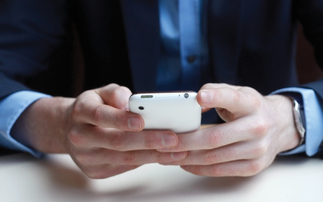